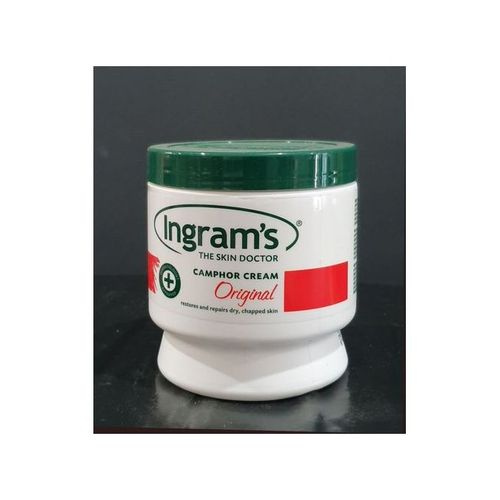 Camphor is a natural product that is transformed into remedies that can be utilized as oils, powders or creams for the alleviation and treatment of various conditions. Created by harvesting the bark of a camphor tree and concentrating it into a usable powder, camphor has been combined with other oils and moisturizing products to become an easily applicable remedy.

Ingram's camphor cream is dermatologically approved and has been specifically formulated to help moisturize, restore and repair dry, chapped skin. It contains the warming, comforting benefits of camphor as well as glycerine and a blend of rich, moisturizing ingredients to soothe, soften and protect dry skin problem areas. It also relieves the irritation caused by sun and wind burn. Trust ingram's - The skin doctor. 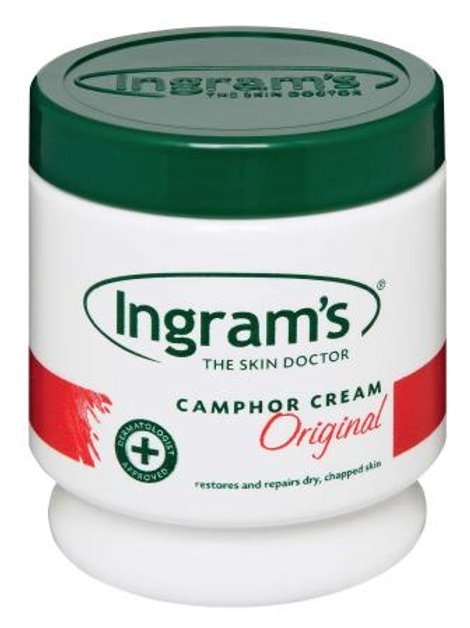 Pimples and acne are a daily struggle for most people and after trying all the expensive beauty products and complicated “make your own face mask” recipes, you will be pleased to know that camphor cream is the answer. Camphor’s natural properties include soothing irritated skin and decreasing the redness associated with this skin condition. When applying the cream, don’t be afraid of the initial “stinging” feeling (that means it’s working and increasing your blood flow like it’s supposed to) and it will be followed by a cooling sensation.

Be consistent with your use of camphor cream and revel in the visible results. You can also use it in various ways and combinations to achieve an effective beauty routine and manage skin care problems with camphor.

Camphor cream can help with fungal conditions, especially nail fungus. It soothes pain and minimizes the growth of fungus and its chances of recurring. It has natural antiseptic and anti-fungal traits that make it an easy topical remedy for those painful and rather unpleasant fungus infections.

Other than banishing acne, there are other skin conditions that can be treated with the simple application of camphor cream and camphor products. For cracked heels, applying camphor cream softens the skin, keeps it moisturised and ultimately fills the cracks like a soothing cement that prevents more cracks. The same applies for calluses on the hands. Just be sure not to apply camphor cream on open skin as it can reach a strong level in your system and possibly lead to poisoning.

Applying camphor cream is also known to soothe and lessen the visibility of burn marks or acne scars.

Eczema is a common inflammation and irritation of the skin which generally includes rashes, dry skin, itchiness and sometimes sores on the surface of the skin. Camphor cream can be used to control the itching and inflammation as well as soothe the sores and reduce the redness. It is a remedy for overcoming the overall discomfort associated with Eczema.

Based on the above, it is clear that camphor cream can be used for the relief of many skin ailments. Here are a few more properties of camphor cream which make it an amazing product.

Camphor cream (or camphor products in general) serves as an antioxidant, a stimulant, an anesthetic, an anti-inflammatory and a decongestant through rubs and vapour treatments. It is the more natural alternative to heavy medicines and drugs that are usually prescribed and can be used as a “first line of defense” before moving on to stronger treatment options.

Camphor creams and products can also be used as a form of gastric relief, as a muscle spasm relaxant, for the promotion of healthy blood circulation and even as an aid for painful joints.

It’s important to be aware that too much of anything is bad for you and this applies to camphor products as well. Use them when necessary and in moderation to stay in the safe zone and away from undesirable side effects, some of which are ironically linked to conditions it relieves. It should not be used on children under the age of 12 (even then, be sure to confirm with your general practitioner).