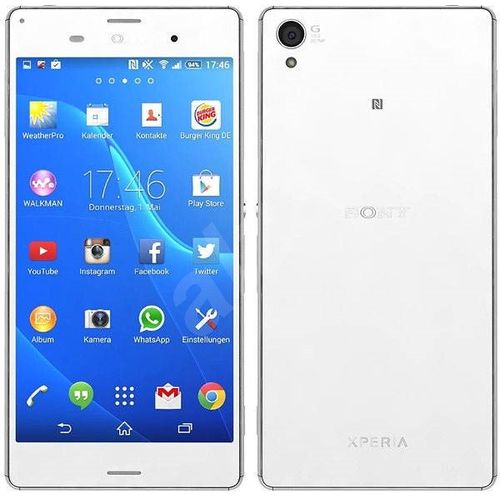 Enjoy powerful performance and high-quality optics with the black Sony Xperia Z3 D6603 16GB Smartphone. This device features IP65 and IP68 certifications for resistance to dust and water. The Xperia Z3 is powered by the Snapdragon 801 chipset, which incorporates a robust 2.5 GHz Qualcomm Krait 400 CPU. Additionally, this smartphone has 3GB of RAM for efficient multi-tasking and a 16GB storage capacity. A microSD card slot is also onboard, which allows you to expand the phone's storage capacity by interfacing microSDXC cards up to 128GB.

The Xperia Z3 is endowed with a large 5.2" TRILUMINOS IPS LCD display. This screen is scratch resistant and designed to deliver life-like color reproduction with optimized image contrast. The phone's Full HD 1920 x 1080 native resolution allows you to view vivid 1080p content without pixel-loss. On the rear of the camera is a 20.7MP camera with a notable 1/2.3" Exmor RS sensor for capturing bright and detailed images. For high-resolution selfies and 1080p video-chatting, the Z3 is also equipped with a capable 2.2MP front camera.

Bluetooth 4.0 is built into this device for pairing with other Bluetooth-enabled devices. With dual-band 802.11a/b/g/n/ac Wi-Fi, you can enjoy high-speed wireless Internet connectivity. Integrated Miracast and NFC give you the ability to connect-to compatible devices for wirelessly sharing content like photos and music. GPS with GLONASS is also onboard for using Google Location and Maps services. The Xperia Z3 houses a high-performance non-removable 3100mAh battery that can deliver up to 130-hours of music playback and 920-hours of standby.

Built with the same components found in Sony's compact digital cameras, the Xperia Z3 offers a rear camera with a large 1/2.3" 20.7 megapixel Exmor RS Sensor for high definition image capturing. Sony Exmor RS for Mobile image sensors' feature a unique stacked structure that allows for even more light gathering ability than even back-side illuminated image sensors, leading to less noise and better low light ability in a more compact size. In front of the sensor is a bright 25mm equivalent Sony G Lens that also helps produce sharp pictures even in low light. The Xperia Z3 also features the Sony BIONZ for mobile image processor which helps eliminate noise while preserving detail even at ISO sensitivities up to 12800. Video can also be recorded at vivid 4k resolution.

With its IP65 and IP68 ratings, the Xperia Z3 is both waterproof and dust-resistant. Provided that the phone's ports and covers are firmly closed, the Z3 is dust tight and protected against low pressure jets of water from all practicable directions in compliance with IP65. It can also be kept under 5' of fresh water for up to 30-minutes in compliance with IP68.

This phone is designed to work on GSM networks and is 4G LTE capable. LTE is an advanced cellular network data protocol capable of data speeds so fast that they compete with wired broadband internet providers. With an LTE connection, this phone should have no problem streaming HD video, downloading apps, uploading photos, or anything else that requires a high-speed data connection. The phone is also backwards compatible with 3G and 2G data for instances when you can't get LTE. In addition to cellular wireless, this phone also features Bluetooth and Wi-Fi connectivity.