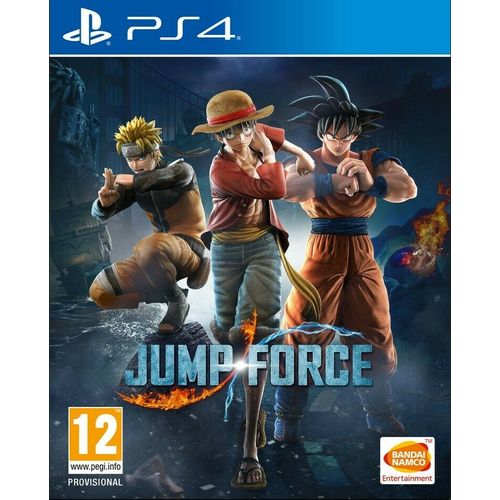 For the first time ever, the most famous Manga heroes are thrown into a whole new battleground: our world. Uniting to fight the most dangerous threat, the Jump Force will bear the fate of the entire human kind.

If you are an anime fan, JUMP FORCE's character roster is a dream come true. Choose from a variety of the most famous manga heroes and villains from Weekly Shonen Jump, and see how they face off against each other. Whether it's Naruto's (NARUTO) Rasengan versus Goku's (DRAGON BALL Z) Kamehameha, or Luffy's (ONE PIECE) Red Hawk, it's your chance to build your all-star team and jump into over the top 3v3 battles in this 3D manga brawler.

Take to the fight in some of the most iconic scenes in both the Jump Universe and the real world from Konoha Village (NARUTO) to the Mayan Ruins of Mexico. For the first time, players can experience these mixed settings in stunning 3D, adding a whole new realism to the gameplay. Some maps have multiple stage transitions, allowing you to smash your opponent into another part of the world after initiating a heavy attack.

Style your own custom character with the elements of your favorite heroes, including their signature outfits and moves. The opportunities are vast, so go ahead and make your character combo goals a reality and create the ultimate anime avatar. Don't forget to show off your Shonen Jump style/aesthetic to players from around the world online.

See how your favorite Shonen Jump Characters face off against each other by competing against your friends and rivals online. Live events, rewards, clans and more await as you explore a huge online lobby comprised of four distinct areas based on settings from ONE PIECE, NARUTO, DRAGON BALL Z and the real world.

Celebrating the 50th Anniversary of the famous Weekly Jump Magazine, Jump Force is making the most of latest technologies to bring characters to life in a never-seen-before realistic design.