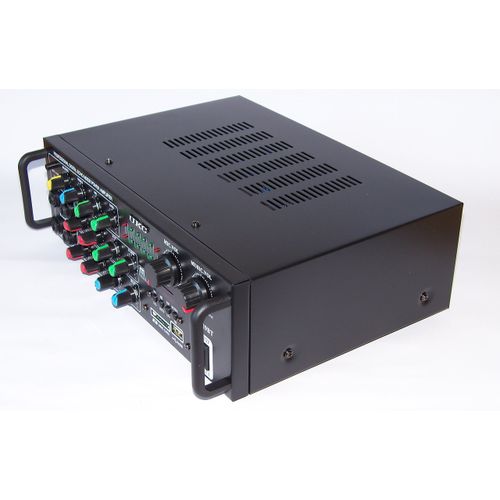 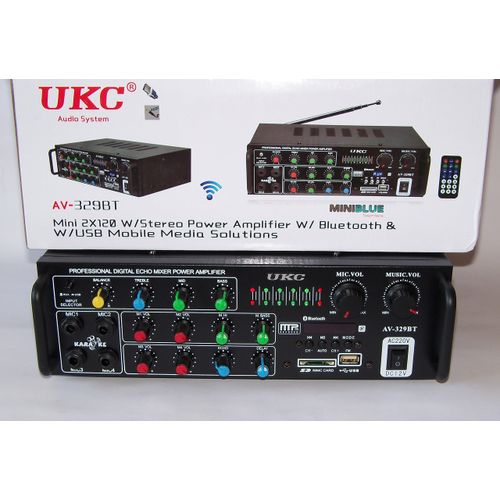 Sound amplifier UKC PA-326BT  - an integrated amplifier with a translational amplifier function. The amplifier has Bluetooth, FM receiver, Karaoke. UKC PA-326BT has an output for one conventional front acoustics and one 110V output for broadcasting acoustics (with a transformer). Plays sound via Bluetooth, from SD cards, from USB drives and from external signal sources (computer, phone, CD player). The output power is 50W per channel into a 4 ohm load. The amplifier is powered by 220V or 12V.
The UKC PA-326BT amplifier is designed for Public Address (PA) systems - notification and sound. Public Address systems are a set of audio equipment designed for background music broadcasting and transmission of voice messages in commercial and public premises. Simpler - PA system is a set of audio equipment for playing music and speech, as well as giving emergency alerts. Such systems are used in shops, gyms, salons, restaurants, shopping centers.
UKC PA-326BT case and front panel are made of high-gloss metal. In the upper part of the front panel there are 4 microphone inputs jack 6.3 mm and controls for them - 2 rotary volume controls, controls for echo, delay and timbres of HF, MF and LF. In the lower left part of the front panel there are bass, midrange and treble tone controls for music, on the left is the power button. On the right side of the amplifier there are playback control buttons and a built-in player screen, below there are volume controls for microphones and music, in the center there are connectors for playing from USB drives and SD memory cards.
Rear panel commutation consists of 2 analog inputs (input A and B) 2 * RCA connectors. To connect the acoustics of the front channels, screw clamps are provided (you can connect with a wire or a banana connector), there are 2 spring clamps for connecting from 12V. Also on the back is a telescopic antenna and a built-in 220V mains cable.
UKC PA-326BT has one pair of terminals "4-16 Ohm - com" for ordinary household acoustics, the second pair  "com - 110V" - only for broadcast acoustics.  Broadcast amplifiers are designed to transmit a signal over wired lines over long distances, up to several hundred meters; many low-power speakers can be connected to such lines. The main feature of broadcasting systems is the use of a matching transformer in the amplifier, which outputs a signal with a 110V level to the line, but the speakers connected to such lines must also have a step-down transformer and accordingly have an input voltage of 110V. Conventional acoustics operate at 20V, so  ordinary speakers cannot be connected to the "com - 110V" terminals.
The amplifier can reproduce sound in MP3 or Wave format both from external sources and from USB drives and SD cards, there is an FM 87.5-108 MHz radio. Can play via Bluetooth, connects easily with any source. The sound from the microphone is superimposed on the sound from any source that is being played at the time.
The amplifier is neatly made inside - the amplification boards are separated from the player and pre-amplification boards by a powerful cooling radiator, the UKC AV-326BT is powered by 2 transformers, the power amplifier is made on transistors.